The visual future of reactive applications with statecharts

As the number of possible states in your app grows, developing UIs can become exponentially more complex. With the help of finite automata, or finite state machines (FSMs), you will be able to manage your app's states in a simple, robust way, and even visualize them! In this session, we will discover how FSMs and statecharts can take your UIs to the next level, with innovative techniques for implementing, testing, and visualizing your app's finite states in a robust, automated way, with plenty of use cases, demos, and resources.

Finite state machines are an extremely important topic for any software developer who wants to create robust systems and user interfaces, and they're nothing new: FSMs have been used for over 50 years in applications from electronics to video games. Unfortunately, FSMs are seldom used explicitly when creating user interfaces, because it's much easier to implement UIs from a bottom-up approach, which is adding code inside event handlers that mutate and juggle state when needed.

However, this approach means that the entire app flow is inside the mind of the developer, which makes understanding an app's logic difficult to understand, test, and extend when more features are needed. FSMs and statecharts solve this problem elegantly by making the transition between states explicit. David will be presenting an innovative approach to representing these declaratively, which gives developers many advantages: 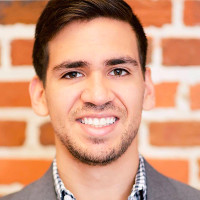 David Khourshid is a Florida-based web developer for Microsoft, a tech author, and speaker. Also a fervent open source contributor, he is passionate about JavaScript, CSS, animation, innovative user interfaces, and cutting-edge front-end technologies. When not behind a computer keyboard, he's behind a piano keyboard or traveling.